Namibia: "Born of the Sun" by Joseph Diescho

In his novel of Namibian life, Born of the Sun, Joseph Diescho shows a compressed history of colonization and liberation of this southern African nation. He writes in his preface that his intent is, among other things, to "portray a vivid picture of African rural life," in which he succeeds admirably. He also says he has deliberately used some words about that life, such as hut and krall (a small stockaded community, as below) that have become imbued with derogatory meaning.  Maybe in 1988, at the time of publication, that was the case, but for me, neither has negative connotations now (but then, I'm fairly clueless about connotations sometimes). 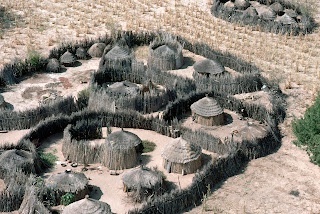 Namibia is toward the end of the African continent, bordered by South Africa to the south and Angola and a tiny bit of Zambia to the north. It has a long dry coastline--not at all tropical--and an interior desert. Rainfall is sparse and concentrated. As told in the book, people herd goats and cattle and tend small plots, usually maintained by women.

The book starts with a section called "Relations."  We learn of rural village life, from the birth of  Muronga's son, to a council sitting in judgement of a woman accused of adultery when her man was away working in the mines. Village life follow customs and traditions handed down from elders. While he prays to the God of Our Forefathers, Muranga seeks additional powers from the Christian god via the German-established Catholic mission. Being catechized, baptized and married will bring good fortune, he thinks, because baptized people receive favors. As this section ends, the villagers learn they are to be taxed by the white colonizers (South Africa). They have no money and little need for it in their village.

Muronga and a friend apply to work in the mines to the southeast. We follow their journey through newly independent (as of 1966) Botswana, to the gold mines in South Africa. There, in a multi-chapter segment called "Between Rock and Gold--Resistance," he learns of African communities far from his own in Malawi, Zambia, and Tanzania, all of which had become politically independent from Britain.

He also learns what the white people of South Africa think of him and his fellow mine workers under the system of apartheid.

"Muronga has always known and appreciated discipline. He is not afraid of hard work, but this work isn't so much hard as it is demeaning--deliberately demeaning...How can one man treat another with such contempt?  Didn't Pater Dickmann say God expects people to love one another...and treat one another as they themselves would like to be treated? Perhaps, though, the supervisor has a different God from Pater Dickmann's?...To Muronga, this is the only logical explanation for the [mine] supervisor's behavior. Certainly he couldn't wish to be treated as he treats others!" (p. 182)

After the miners organize a work-stoppage that is ultimately unsuccessful, Muronga participates in a mostly peaceful protest. He and his fellows are arrested and taken to Pretoria. An Afrikaaner policeman yells at them and "Muronga does not understand . But he sees that the words coming from the white man's mouth carry anger and hatred, and his eyes convey a sense of thirst to kill and destroy." (p. 236)

He is brutally interrogated and beaten in the South African prison and deported, via Botwana, to South West Africa (as Namibia was known then). I won't tell you the tale's end but the last section is called "Difficult Decisions."  In it, Muranga tells his colleagues in the struggle,

"We must tell our people how other black people have shaken off the yoke of oppression by the white people. We must motivate our people to unite...in our struggle for freedom. But we must also tell our people honestly that the road to freedom will be hard. We have no guns, we have no cars, we have no airplanes. But we have the will. And with this will, this strong will to be free,  one day we will be free...free to determine our own future and free to rule ourselves." (p. 267-268).

In fact, it took decades from the time this story was set. Namibia gained independence in 1990, in a protracted guerilla-led war against South Africa.