Iran: "Children of the Jacaranda Tree" by Sahar Delijani

This work, by an Iranian woman born in prison in 1983, depicts what could be only a small slice of the traumas the people of that country have experienced in my lifetime.  Children of the Jacaranda Tree presents, literally, the birth of a generation of people seeking a positive future for this long-embattled land. Some of the children in the novel--born in the early 1980s--participate in the roughly six-month Green Movement in the latter half of 2009 and into early 2010. 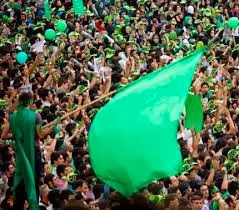 Delijani writes viscerally of the realities of daily life, from child birth through death, and always from a woman's point of view. She describes tactile sensations, scents, tastes, visions, and sounds in direct terms. The opening section tells of the birth of the infant Neda in a hospital where her mother has been emprisoned by the Islamist forces that took over the country (from 1979 onward).

Neda brings, for one brief month, joy to the women who share her mother's cell. The women bicker and fight before the infant's arrival, bond to help the new mother, and then to console her when the guards remove the infant to her grandparents' home.

Other women in the cell also have children. Most of the mothers are eventually freed and remain in touch in Tehran. Their lives--and their children--meet. And here is the symbolism of the jacaranda tree, which even I get. The specific tree of the title grows in one family's courtyard, and it is under this tree that many of the women's children play at various times, and where they hear of their parents' struggles and sacrifices for a more liberal, free, even democratic Iran. 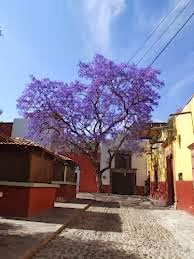 We see two children of this generation at the end, in exile in Turin, Italy as they discover how their paths have crossed in the past. The Green Revolution was repressed, but these two, at least, remain hopeful that there will someday be a way to live in Iran.

The week that I read this book I also read in the New York Times about a new generation of "boat people" escaping through Indonesia to Christmas Island. They are not particularly successful because Australia, which controls the island, sends them to detention centers in Papua New Guinea or the Republic of Nauru. Some people in the article are refugees from Iran -- suggesting that there is still much progress to be hoped for there, whether for religious freedoms, eocnomic opportunity, civil rights, or political expression.

Delijani's work helped me understand the desparation that could drive someone to spend thousands of dollars on a very uncertain voyage to try to reach a better place.
Posted by Unknown at 4:52 PM